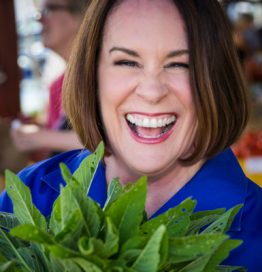 Nancie McDermott is a cookbook author and cooking teacher fascinated by the people, stories, and places behind the food. A North Carolina native and graduate of UNC Chapel Hill, she loves exploring the history, culture, and distinctions within the regional cuisines of the American South. A former Peace Corps volunteer in Thailand, she also focuses on the cooking of Thailand and the culinary traditions of Southeast Asia. A contributing editor for Saveur and Edible Piedmont, she writes for magazines and newspapers including Fine Cooking, Cooks Illustrated, Bon Appetit, and Every Day with Rachael Ray. She also teaches cooking classes around the country. Nancie’s extensive television cooking experience includes leading the host of an Epicurious show around a Los Angeles Thai market for the Discovery Channel, and playing the Cake Detective on the Coconut Cake episode of Alton Brown’s “Good Eats” on the Food Network. Her online video cooking classes are featured on Craftsy.com Nancie’s cookbooks include Southern Cakes: Sweet and Irresistible Recipes for Everyday Celebrations; Southern Pies: A Gracious Plenty of Pie Recipes from Lemon Chess to Chocolate Pecan, and Southern Soups and Stews: From Gumbo and Burgoo to Etouffee and Fricasee, an IACP cookbook awards finalist. Her latest book is Fruit: A Savor the South Cookbook, published in March by the University of North Carolina Press. . Nancie is a member of the International Association of Culinary Professionals, Les Dames d’Escoffier, the Association of Food Journalists, and the Southern Foodways Alliance. She lives with her family in Chapel Hill NC.

Cookbooks and Food Blogging: Made for Each Other!