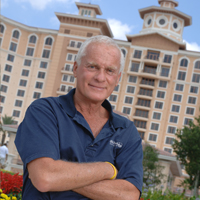 Among numerous accolades, Rosen was named by the Orlando Sentinel “2011 Central Floridian of the Year” and “2011 Cornell Entrepreneur of the Year ” by his alma mater. He was inducted into Visit Florida’s Tourism Hall of Fame in 2010. He has received Sustainable Florida’s Legacy Award for his contributions not only for his environmental efforts, but for his contributions to the local community and has been named an Orlando Business Journal “Healthcare Hero” and featured on national media outlets for his innovative healthcare program.

In 2009, he was inducted into the Orlando Sentinel’s Culinary Hall of Fame for his works including creating the Rosen College of Hospitality Management at UCF and his Rosen’s Perfect Pizza, which was sold in schools for one year with all proceeds benefiting college scholarships, among other things.

When Mr. Rosen opened his first hotel in 1974, the now Quality Inn International, he was the jack of all trades, including chef. He still cooks meals for his family on a weekly basis.