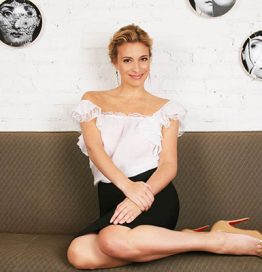 Food Network star, acclaimed chef, restaurateur and lifestyle brand, Donatella Arpaia is a driving force in the culinary world. Her distinctions include being a Today Show contributor, Crain’s named her one of their “40 under 40” and the New York Post named her as one of the ‘Most Powerful Women in Manhattan’.

Although she grew up in a family of restaurateurs, she pursued a brief career as a corporate attorney before returning to her undeniable passion for the culinary arts. Donatella has opened a string of successful restaurants including Davidburke & Donatella, one of the top rated restaurants in NYC, the Michelin starred Anthos, and Kefi. Most recently she announced the launch of her first upscale quick service pizza concept in Grand Central Terminal opening this July. These projects and more have collectively earned substantial praises, such as Michelin Stars, Five Diamond Awards, and James Beard nominations.

In recent years Donatella has evolved into a full-scale lifestyle brand. She has her own show on the Home Shopping Network and a full line of food products sold exclusively at HSN. She partnered with Frontgate to design, create and launch a full line of homeware and entertaining products.

Donatella is a sought after speaker who has been honored at events around the country including the National Organization of Italian Women, The International Pizza Expo, City Harvest and the American Humane Association.