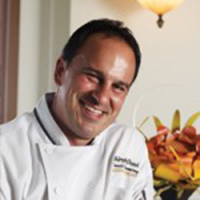 Trained at Johnson and Wales in pastry arts, Chef David Ramirez has appeared on the Food Network, has worked at five-star properties in Atlanta and Orlando and most recently, was named captain of the 2009 USA Team to the internationally acclaimed Coupe du Monde pastry competition in France. He has competed against pastry chefs from all over the world and won dozens of awards from American Culinary Foundation competitions.

This self-described “chocoholic” says that no matter where he is — whether strolling the toy aisles of Target with his three kids, attending a black tie event or visiting Orlando’s amazing theme parks, he views the world through “chocolate-colored glasses”— always wondering how every object he sees could be translated into an edible sculpture.

Sweet, but never saccharine, Ramirez’s elaborate chocolate creations reflect his youthful outlook. In fact, he has been known to actually cut apart his kids’ toys in order to make a chocolate mold. The loving dad is always quick to replace what he borrows.